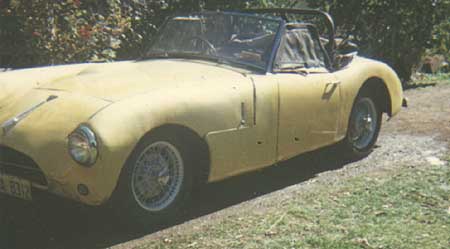 "My brother-in-law purchased this car approximately 21 years ago to save it from being purchased and dismantled for its parts. It was in extremely poor condition and the bodywork is original only from the doors back. It is was involved in a bad accident in Hobart and subsequently had a fibreglass nose fitted (see pic).

The car was stored outside at his parents but following further deterioration, was then given to me as 'custodian' for life with the thought that I would get it running ASAP. Unfortunately I immediately stripped the car to a rolling chassis and left it. The panelling supporting the aluminium bodywork was corroded so much that when the firewall was lifted off, it fell in two. With a young family and, as our daughter grew up, her car in our two car garage there was limited space so the original bodywork, chassis etc. were all installed between the piers under the house. As the fibreglass nose / scuttle was in such poor condition, and space was at a premium, this was disposed of.

Well, our daughter has since left home and we have a little 'spare' cash so the time has come to commence a slow rebuild. The status at the moment is the chassis is out having some brackets repaired prior to blasting and powder coating. Nolathane front suspension bushes are on order and other components have been identified for ordering. As an aside to this, when the rear spring hangers were undone the driver's side spring fell out. This was broken at the front eye and only held in place with the eye bracket by the 'tramp' rods limiting backward movement of the axle.

The current timetable is to have the chassis back on its wheels around Feb 2002 and engine and gearbox rebuilt and re-installed by end 2002. I have no plans past that and will consider options for the front body panels when the time comes"

See BEFORE and AFTER pics of the in-progress restoration of a Doretti.